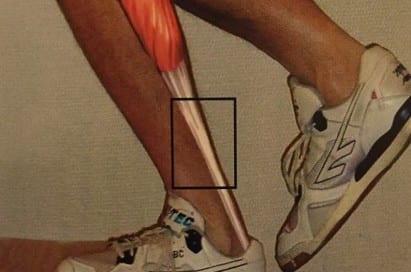 In the 1980s, tendinopathy was known as tendonitis1, as it was believed that cellular inflammation was the cause. However, the term for tendon overuse injury has more commonly begun to be called tendinopathy, due to the pathological nature of this injury.

Which tendons are we talking about?

Tendons can be torn partially or completely. A complete rupture can occur without warning, usually in older athletes without a history of injury in that particular tendon. The two most commonly ruptured tendons are the Achilles2 and the supraspinatus tendon of the shoulder. Partial tears are characterised by the sudden onset of pain and by localised tenderness. In this article, we are looking at the Achilles tendon.

What are the symptoms?

Symptoms of overuse tendinopathy generally develop gradually, with typical complaints of pain and morning stiffness. These diminish with walking or applying heat (eg a hot shower) and in most cases recur several hours after exercise or overnight. Where there is a tear in the tendon, recovery does take longer. Where an unexpected rupture occurs, patients report on hearing a noise like a shot, pop or feeling like having been kicked on the tendon.

Surgery is the most common course of treatment for this, however it is dependent on the person and surgeon. Despite the intensity of the pain suffered by patients complaining of this overuse injury, there is usually a good long-term prognosis, even for demanding activities such as running and court sports (squash, tennis).

When examined, most patients feel pain just doing single-leg heel raises. In more active individuals, they may need to hop on the spot or hop forward to feel the pain. Very often, the calf muscles are also tight and there may be stiffness of the joint in the ankle.
So what can one do about it?

Specific exercises (Alfredson’s heel-drop is a protocol most often used) are usually prescribed for therapy of Achilles tendinopathy. These should be done twice a day, with 15 repetitions for 12 weeks. (Yes, for that long!) Do these exercises SLOWLY over the edge of a step and ensure you can keep your balance. 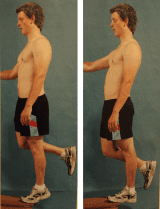 a)    Stand with one foot slightly raised, the knee straight and the other leg bent at the knee.
b)    Start with the foot parallel to the ground then drop the heel
c)    If the pain is too intense, then begin with both feet on the step and drop both heels at the same time.

a)    Again, stand with one foot slightly raised, the knee straight and the other leg bent at the knee.
b)    This time, the knee of the standing leg should be flexed at 45°. The other knee remains bent as per exercise one.
c)    Start with the foot parallel to the ground then drop the heel. 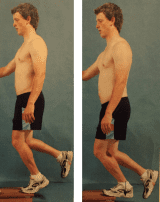 When pain is no longer experienced doing the exercises above, load should be added eg put on a backpack or hold some weights until the exercises are uncomfortable to do.  The load can be increased to as much as 60kg. The exercises are then repeated until all symptoms subside.

Since the introduction of various protocols, high levels of success have been achieved worldwide in the treatment of tendinopathy and has saved many patients from having a more severe injury such as a tear. It is interesting to note that heel drops are far more effective than heel raises, but doing both may promote muscle strength. So, in this case, exercise is the best medicine!

If you are concerned that you may be experiencing this disorder, contact your physio for an assessment and programme of exercises focused on your smptoms.

1   inflammation of a tendon, most commonly from overuse but also from infection or rheumatic disease
2   Achilles, the legendary warrior and hero of Homer’s Iliad, died as a result of an injury to the mid-portion of his tendon.